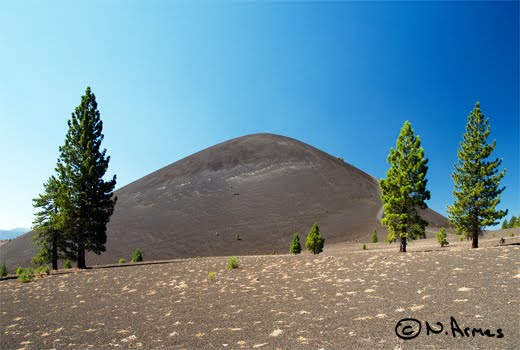 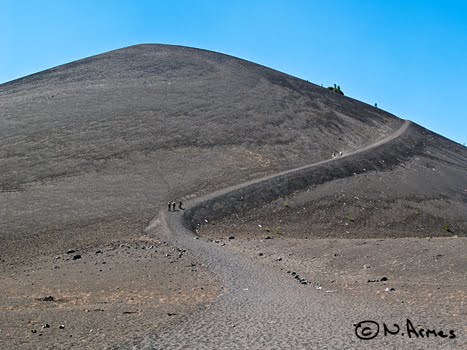 It's a 4-mile round trip, with the first 1.2 miles being easy until you get to the base of the volcano. From then on until you reach the summit it's 700 feet at a steep incline on loose pumice, where, you slide back one step for every two taken! A hiking stick or two is definitely recommended.


Make sure you use ample sun protection. As you can see in my pictures at least in August the skies are pretty much cloud free and there's little to no shade on the Cone. You also kick up a lot of fine dust while walking over the cinder, so do protect your camera equipment and keep lens changes on your SLR to the absolute minimum and preferably don't change the lens at all unless you enjoy cleaning your camera's innards!


Once you reach the top you will not be disappointed, the climb is well worth the effort. The awesome crater of Cinder Cone is 1,000 ft (300 m) in diameter and 230 ft (70 m) deep. There are actually two cones at Cinder Cone—the remnants of a nearly completely buried earlier cone can be seen on the larger cone's south side. Much of the earlier cone was probably destroyed by lava flows erupting from its base. 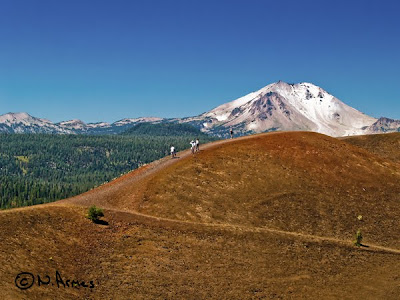 You are treated to super views from the rim of the crater. In this image you can get a good idea of the scale from the people walking along the rim. In the background you can see Lassen Peak which is still considered an active volcano which last erupted in 1915 and forms part of the Cascade Volcanic Arc, stretching from northern California to British Columbia.  Lassen rises 2,000 feet (610 m) above the surrounding terrain and according to Wikipedia (cite) has a volume of half a cubic mile, making it one of the largest lava domes on Earth.
[Zuiko 50-200mm f2.8-3.5; ISO 200, 1/160s at f5.6]

The Fantastic Lava Beds viewed below the Cone are the basalt lava flows that occurred after the main eruption that formed the cone and spread northeast and southwest damming creeks to form lakes including Butte Lake. This image shows a view from the top of the Cinder Cone of the Fantastic Lava Beds (black rock centre) with the Painted Dunes in front (bottom left in the image). The Park Ranger taking his lunch break in the shade of the tree gives a nice impression of scale. Fantastic is no under-statement! Snag Lake formed from damming of a river by the lava flow, is seen in the background. 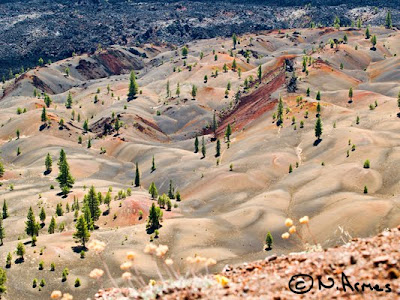 The wonderful colours of the Painted Dunes are the result of oxidised ash formed on falling onto the hot lava flows during the eruptions. Blocks of red, cemented scoria within the Painted Dunes lava flows are pieces of the earlier cone, which were carried away by the flowing lava. The black rock of the Fantastic Lava Bed can be seen in the background. 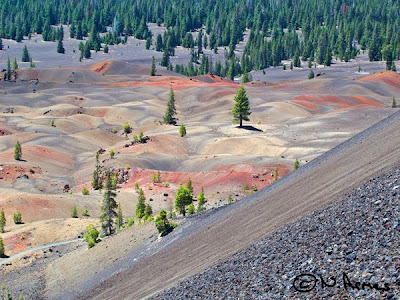 When you are finally able to pull youself away from the stunning views, there's a second path down the Cone so you can make a circular route rather than back-tracking. It's well worth taking this path as you get super views of the Painted Dunes as you descend. 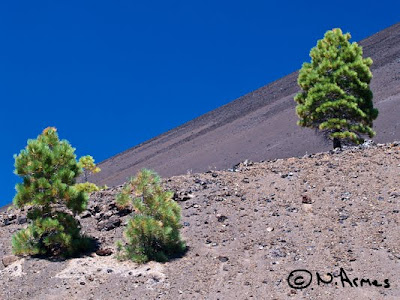 Despite the arid conditions and poor nutrients on the slopes of the cone, plant life, including fir trees manage to find a foothold and thrive, but none appear to reach any significant height, perhaps due to the poor conditions. 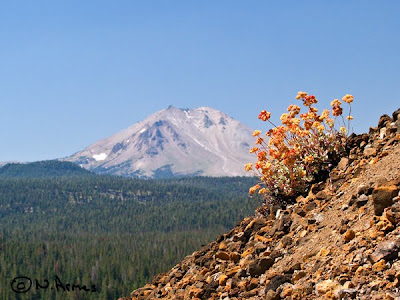 August is pretty dry in northern Califirnia so the smaller plants that cling to the scree slopes were largely senescing at this time. 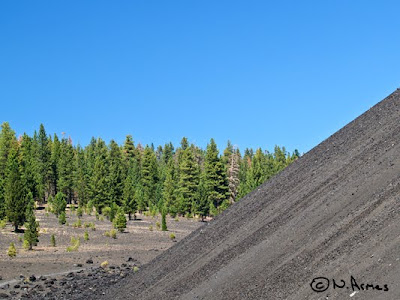 At the base of the cone relatively thicker coniferous 'forest' prevails and the walking becomes easy again! 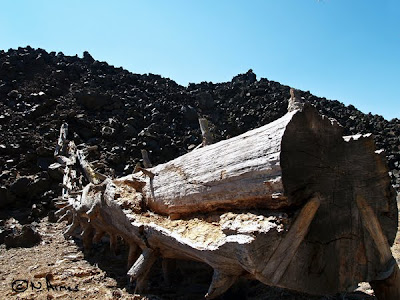 Once you are back on flat ground on the trail to Butte Lake you get a close up view of the edge of the Fantastic Lava Beds. I didn't appreciate what this was on the way up, as to me it looked like a huge pile of rocks pushed by a bulldozer! Only from above, when you are on the Cinder Cone do you appreciate the extent of the Beds and realize that the abrupt end to black rock turning to regular soil is where the lava reached its final boundary point and started to cool.

Definitely a memorable day and I hope to return for a longer visit to explore the area in more detail. In particular I would like to be on the Cone at sunrise and/or sunset rather than the midday foray documented here. More images and of higher resolution can be viewed on my website by clicking here